How to make boring practice….a little more engaging! (and a few freebies!)

Let’s face it, in order to really understand math, there needs to be practice.  However, no one really wants to just sit there, in their uncomfortable seat, and do what seems like hundreds of practice problems on a boring worksheet.   I have 3 different ideas to share with you that are super easy to implement in your classroom!
Engaging Activity Idea #1
Turn the worksheet into a team activity.
I do this all the time!  Just the other day we did it in my resource class and I took some pictures to show you. Because the class is small, we grouped Boys vs Girls.  However, in a larger classroom, I have done this with as many as 32 students.  You just need some board space (or white boards for a larger number of groups), and fun group names.
One of my teacher friends went to a conference a few years back and the presenter suggested a way to have your students come up with team names.  Ever since I heard the method I have stuck with it!  Give your students a very specific way to name their team.  For example, below, I told my students to choose a COLOR and a FOOD.  In a matter of seconds they have team names.  No more taking WAAAAAAAAAAY too long to name teams.

I try to always have the first word be a COLOR so that I can put their team name on a piece of construction paper that matches.  It’s a small touch, but it really adds to the fun when the kiddos see that you are willing to use some more of your resources on them. 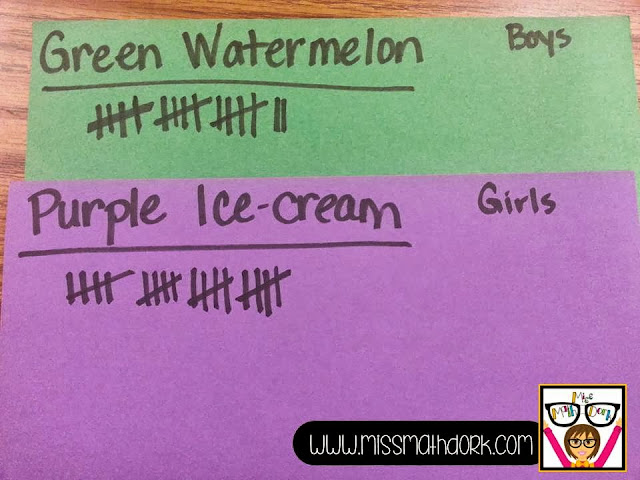 So as you can see, my kiddos chose to be the Green Watermelon and the Purple Ice-Cream.  Then, we took a very boring, dry worksheet and turned it into a competition.
Each team was given the same integer addition/subtraction problem.  They had to 1) write the problem, 2) draw their T chart, 3) solve the problem, 4) write the answer and circle it.
Why so many steps?!  Well, what I have learned is that students get VERY competitive AND if one students puts more work on the board they will argue that the other team didn’t “do as much” to get the same answer.  So, I spell out what I have to see for them to be considered “done”. 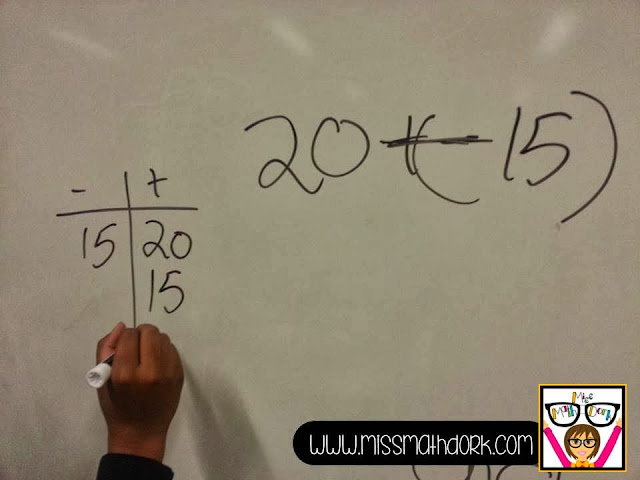 After finishing, the team that gets the answer first, gets 2 points, and each team that gets it correct but not fastest gets 1 point.  Students who are sitting at their desk work on the same problem and if they see their teammate at the board, or on the whiteboard is getting stuck, they are allowed to offer help. 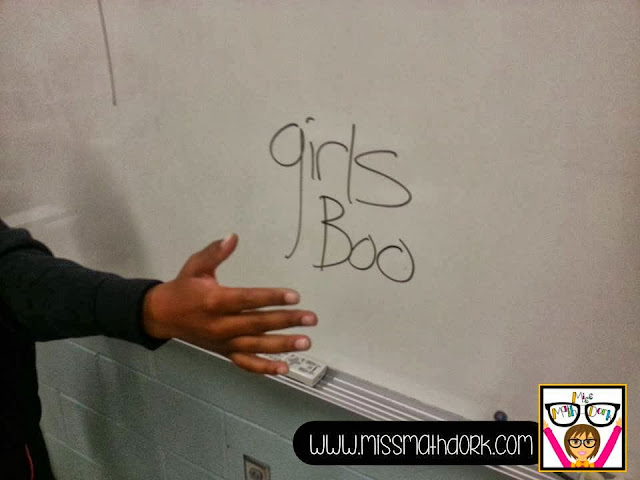 My boys fell behind on the first three problems so they decided they needed a good luck ritual.  They wrote “girls, boo”  (see above) on the board and tapped it each time before starting the problem.  Surprisingly… it worked for a few problems!  So the girls retaliated (see below) and wrote “boys, boo) on their side of the board and knuckled bumped it before each problem.
As long as their competitive nature stays friendly, I let it go.  When it gets a little rowdy, we rein it back in a bit. 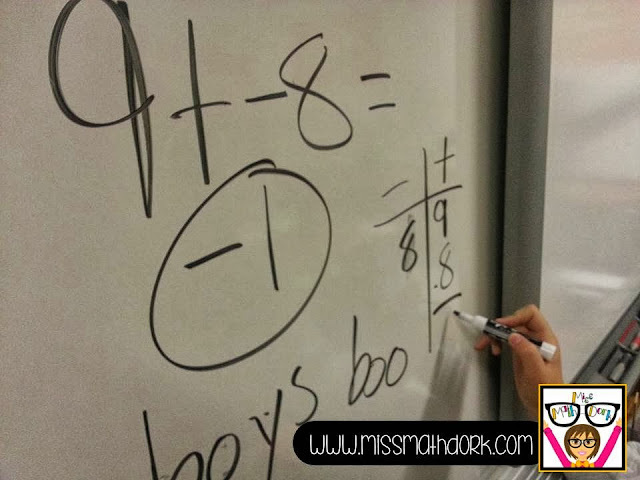 So we ended up playing our game for the entire class period.  Almost 30 adding and subtracting integer problems with absolutely NO complaining…. AND, they helped each other out and worked through mistakes!  Sounds like SUCCESSFUL ENGAGEMENT to me!!
EDIT:  For those of you asking about the T-chart strategy, check this out
Engaging Activity Idea #2 AND a freebie!
Pit your kiddos against each other
(this can be done in teams too)
So, I learned pretty quickly that one of my resource classes can’t handle team type games.  I have 3 football players who are OVERLY competitive and it gets a little nasty….. Also, I have some students who work pretty slowly and speed competitions are just not a great idea.
Enter… Balloon Pop!
(I did not come up with this idea, there are various forms of it all over the internet.
I did create the page below using graphics from Ashley Hughes)
The basic rule of Balloon Pop in my classroom (feel free to modify to fit your students’ needs:
1) Answer set amount of questions.
2) Get the question(s) checked by teachers.
3) If you get the question correct, you may POP (draw an X through) any other teams’ balloon.
4) If you get the question wrong, you have one chance to fix the error (this may change depending on the group you are working with).  If you still get it wrong, the teacher POPS one of YOUR team’s balloons.
5) Once 10 of the 15 balloons have been popped,a  team may choose to blow a balloon back up instead of popping another teams’ by erasing the X through the balloon.
6) A team who has had all 15 balloons popped is SAFE from being popped until they are able to blow 5 of their balloons back up (this keeps people from ganging up on them too badly.)
So…..
Below you can see that I took a SUPER BORING worksheet with almost 60 addition and subtraction of integer problems on it and drew lines between each three problems.   Depending on how fast a team can answer problems will depend on how many problems they need to do to POP a balloon.  In Algebra, solving just one multi-step equation, or one system  problem is enough to pop a balloon.   We decided that 3 addition/subtraction of integer problems would allow enough time between problem sets to not have a perpetual line of getting checked. 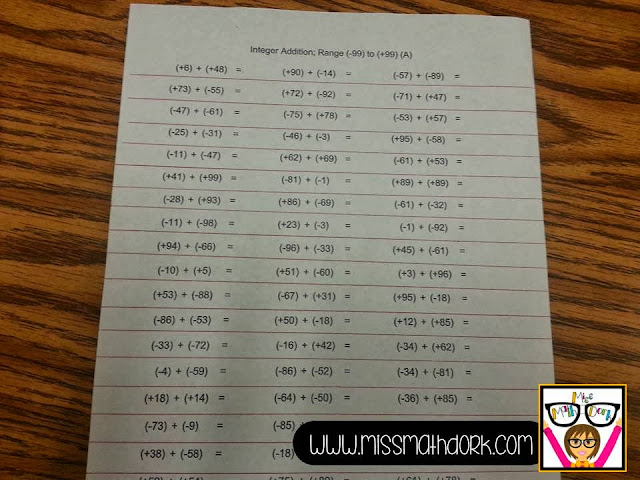 Before class started, I printed the balloons off onto colored paper.  Each team/person has their own color.  This helps personalize the game some as well.  It’s easier to find their color, and they get to choose which color they want to be.  I also slid each paper into a page protector so that balloons could be X’d out and erased as needed.  Once each student chose their color, I wrote their name above their page. 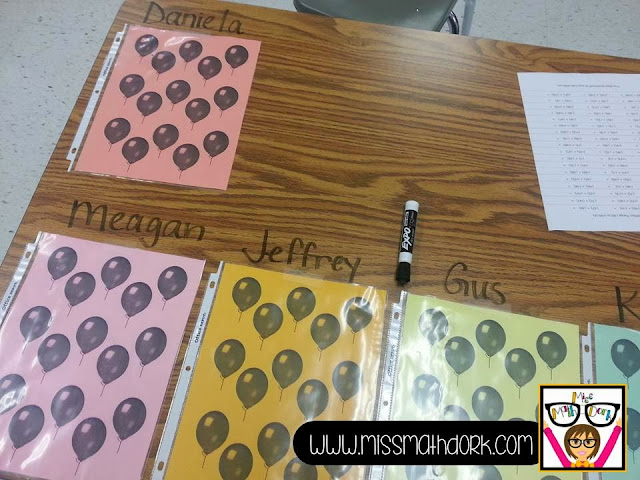 In the beginning, I like to rile the game up a bit.  Meagan came up and crossed out Jeffrey’s balloon, so I said “Uh, oh… Jeffrey’s down a balloon….”.  I try to do this for the first few balloons for each person.  It helps them spread out who they target and keep “that kid” in class from being ganged up on unnecessarily. 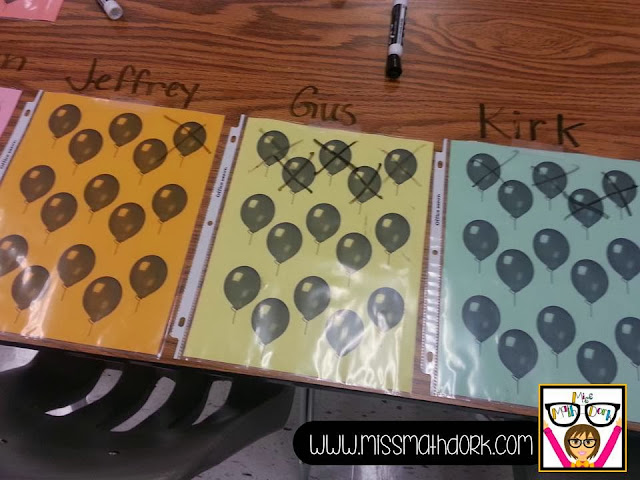 I have seen so many strategic plays happen using this game…. from alliances, to deciding if it’s better to pop someone else balloon, or blow their own balloon back up….  TONS of fun and lots of laughter… even with the overly competitive football player types.
Engaging Activity Idea #3
combined with idea #1 AND a freebie!
Have students create their own problems!
One of my all time favorite engaging activities is to have student create their own problems given very specific criteria.  Why specific criteria?  Well, I deal with middle schoolers and if their isn’t specific criteria, there is always “that kid” that wants to give you the most basic, most obvious answer so they can be done.
Recently my 6th graders have been working on order of operations.  I pulled in an activity that I created that can be used remedially or with extension over multiple grade levels!
You MUST use ALL the numbers 1,2,3 and 4.
You may NOT repeat the 1,2,3 or 4.
The numbers 1,2,3, and 4 do NOT need to be in consecutive order.
You may use addition, subtraction, multiplication or division as many times as you would like.
Parenthesis, Exponents, Square roots, and Fraction bars ARE allowed.
There ARE multiple solutions to EACH problem!
10 = 1 + 3 + 2 + 4 <– lower level students
10 = (4*2) + (3-1)
10 = (3^2) + (1^4) <– enrichment students
I combined the idea of writing their own problem, with being on teams competing against each other.  I wrote 1 through 24 on the board and as students got their problem approved, I wrote it on their team board, and then they wrote the problem on the board.  Writing on the board allowed all students to see which numbers had already been solved. 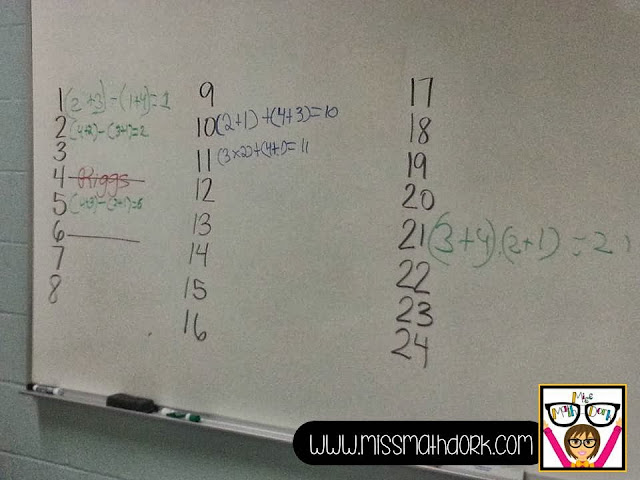 As you can see in the picture, both teams solved the #6 problem differently.  This is perfectly okay!  It’s great for students to see different ways of solving the same problem!  What else I love about this game is the conversations I get to have with my kiddos about order of operations.  Many times they are following order of operations in their head but aren’t writing it on the paper correctly.  Through this activity, you get to see their thinking and help adjust it. 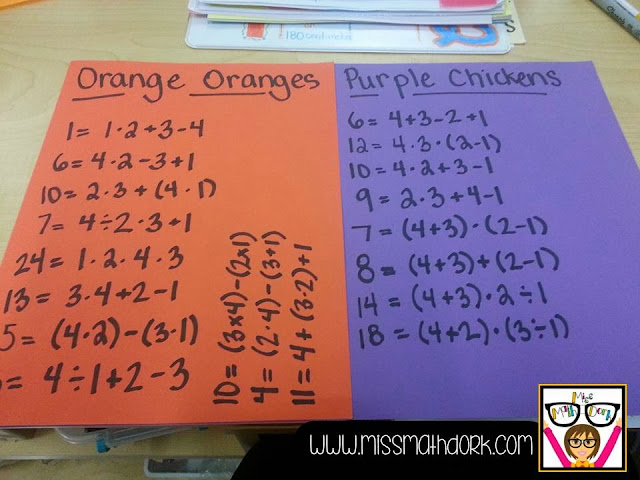 All three of these activities  have been used in my math classrooms as well as my resource classrooms and my kiddos absolutely love them.  It’s so amazing that adding in such an easy step can make the kiddos ask to “do [that activity] again”
It’s so easy to implement these ideas in your classroom!  Which one are you going to try this week?  What other easy to implement ideas do you have?!


Edit:  I did a follow-up to this post on the All Things Upper Elementary blog.  You can find 4 more ideas at this link.